TxDOT changed the in-person public meeting to a virtual format only, in response to the COVID-19 outbreak. The virtual public meeting and TxDOT website will provide the same information as an in-person meeting would have. 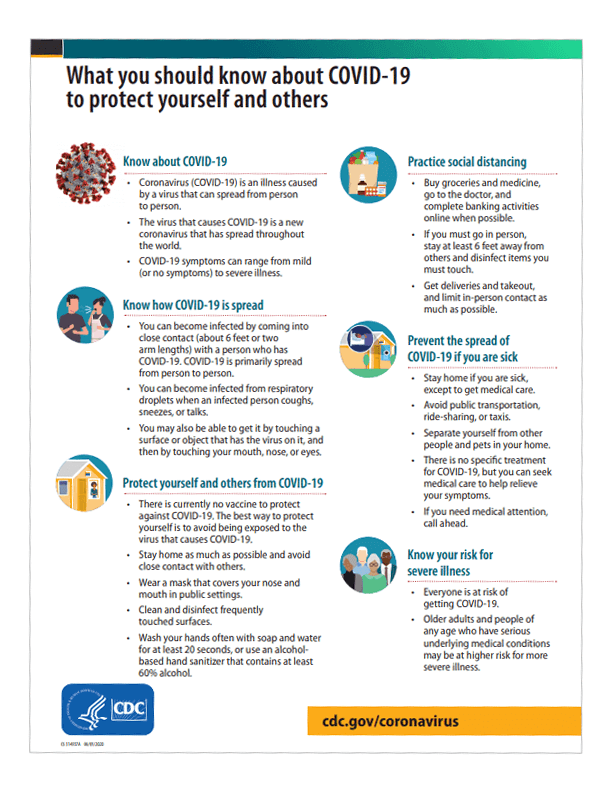 What is a Feasibility Study?

A feasibility study is conducted to analyze potential transportation options, including improving the existing alignment.

Where is the study and what is involved? 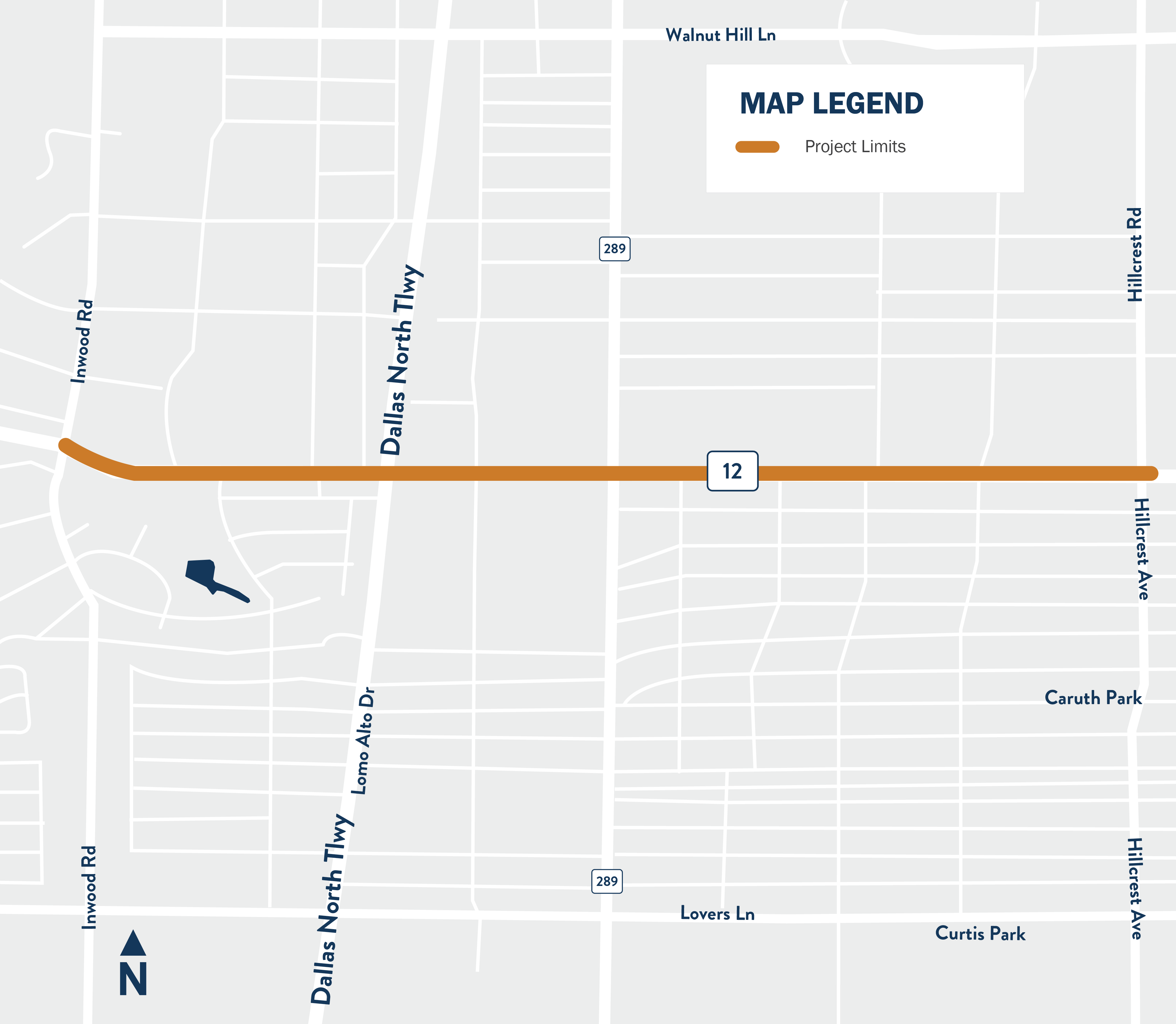 The study is anticipated to recommend one or more solutions that encompass several goals for the corridor. As always, safety is the highest priority for TxDOT. Concepts will also be analyzed for their ability to minimize impacts to the surrounding environment; their ability to improve traffic flow and mobility in the corridor using traditional strategies as well as new technology; their ability to provide alternative modes of travel including transit as well as improved facilities for bicycles and pedestrians; and finally, their ability to provide an efficient solution while minimizing cost and enhancing existing and proposed land uses. Additional goals may be identified for analysis.

Several problem areas have been identified through the existing conditions analysis. Locations with overall congestion during peak hours, left-turn and intersection delays, crash hotspots, and sidewalk deficiencies are shown on the map below. If you know of other problem areas, please use the public input survey or interactive comment map available to provide input on your experience traveling along Northwest Highway.

Photos of the corridor shown below represent some of the problem areas identified on the map above. 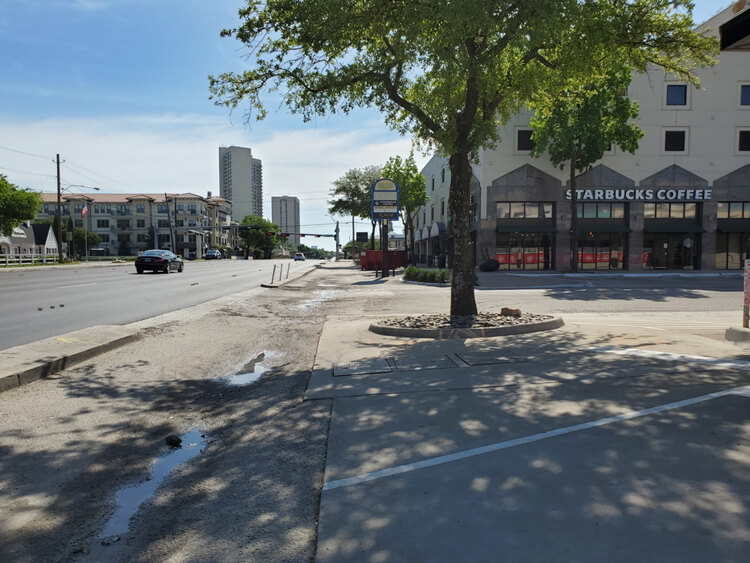 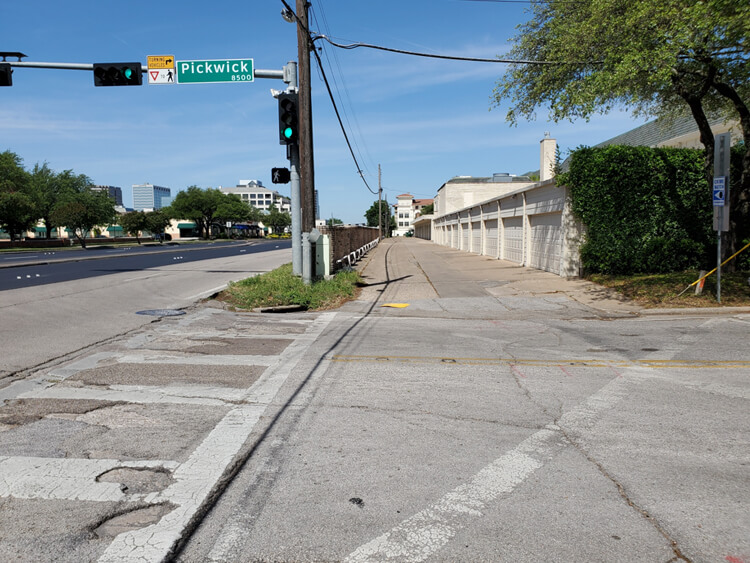 Left-turn delays and lane blockage due to traffic congestion 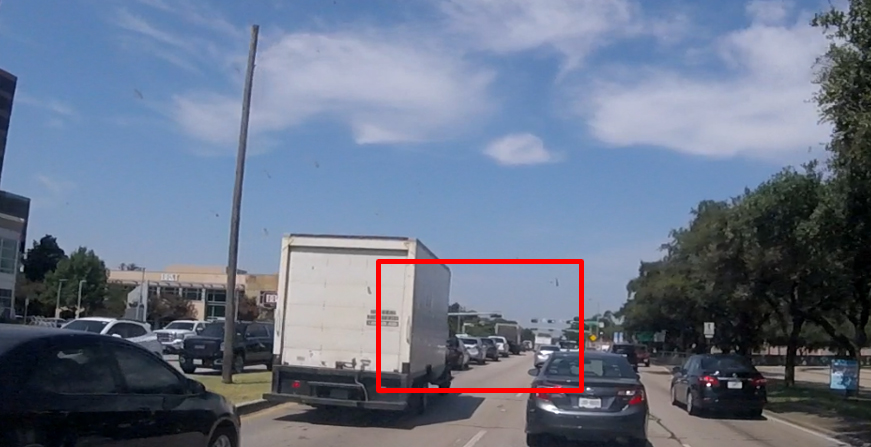 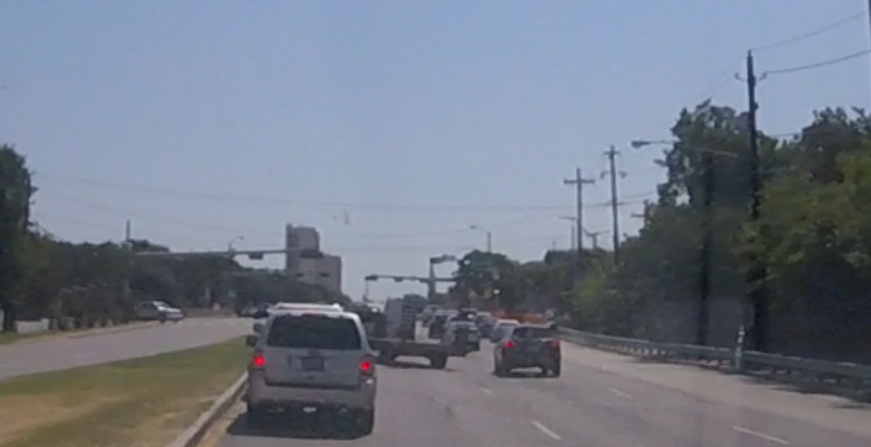 Traffic volumes have remained relatively constant over the past twenty years with volumes along Northwest Highway staying around 50,000 to 55,000 vehicles per day. The primary reason for this limited traffic growth is due to the corridor operating at its capacity while accommodating both local and pass-through traffic. Based on preliminary traffic analysis, traffic is anticipated to experience some growth, about 5% between 2020 and 2045, due to planned development in the study area.

*Traffic impacts from COVID-19 are assumed to be short-term for this study.

We are in the very early stages of this feasibility study and are presenting initial concepts and ideas for possible improvements to Northwest Highway. There will be additional future public meetings and opportunities to provide input. TxDOT welcomes your comments on how we can improve any of the concepts presented here. In a feasibility study, the existing conditions concept is always considered as a viable solution and is also used as the baseline to compare other concepts identified for analysis.

Northwest Highway is currently configured with six lanes, three in each direction. Lane widths vary between 10 and 11 feet. Existing right-of-way varies between 97 and 150 feet wide. A raised median is present in some areas, but not the entire length of the study area. Right of way width of less than 120 feet for a six-lane arterial would not meet current design standards.

In a feasibility study, the existing conditions are studied as the baseline to compare concepts identified for analysis. The no build means no changes are made to the corridor for cars or other modes of travel and issues identified would continue.

Operational improvements could improve traffic flow for cars, provide better connectivity for bikes and pedestrians, and resolve existing drainage issues. Transit could be separated from congestion which may increase congestion in the other travel lanes. Additional right-of-way may or may not be needed.

A Road Diet may reduce the number of travel lanes to allow room for pedestrian and non-car modes of travel. Reducing the number of cars creates additional opportunities for bicycles and pedestrians to utilize the corridor. Traffic congestion may worsen for cars on Northwest Highway, and traffic may shift to adjacent parallel roadways. Right-of-way is not anticipated to be needed for this concept.

Bus Rapid Transit concepts include designated lanes for buses and consolidated bus stops. Car travel lanes could be reduced, and multi-modal lanes may also be added. Right-of-way may or may not be needed depending on final concept recommendation and design.

An Elevated roadway concept would require additional right-of-way for Northwest Highway and include lanes that are elevated above the existing roadway. The elevated lanes in this concept would be lanes that pass through the area and would not have access to businesses and homes in the corridor. The surface level lanes would have access to land uses adjacent to Northwest Highway. The beginning and end of the elevated section would be wider where the surface lanes and elevated lanes separate and would require additional right-of-way as seen in the image on top. 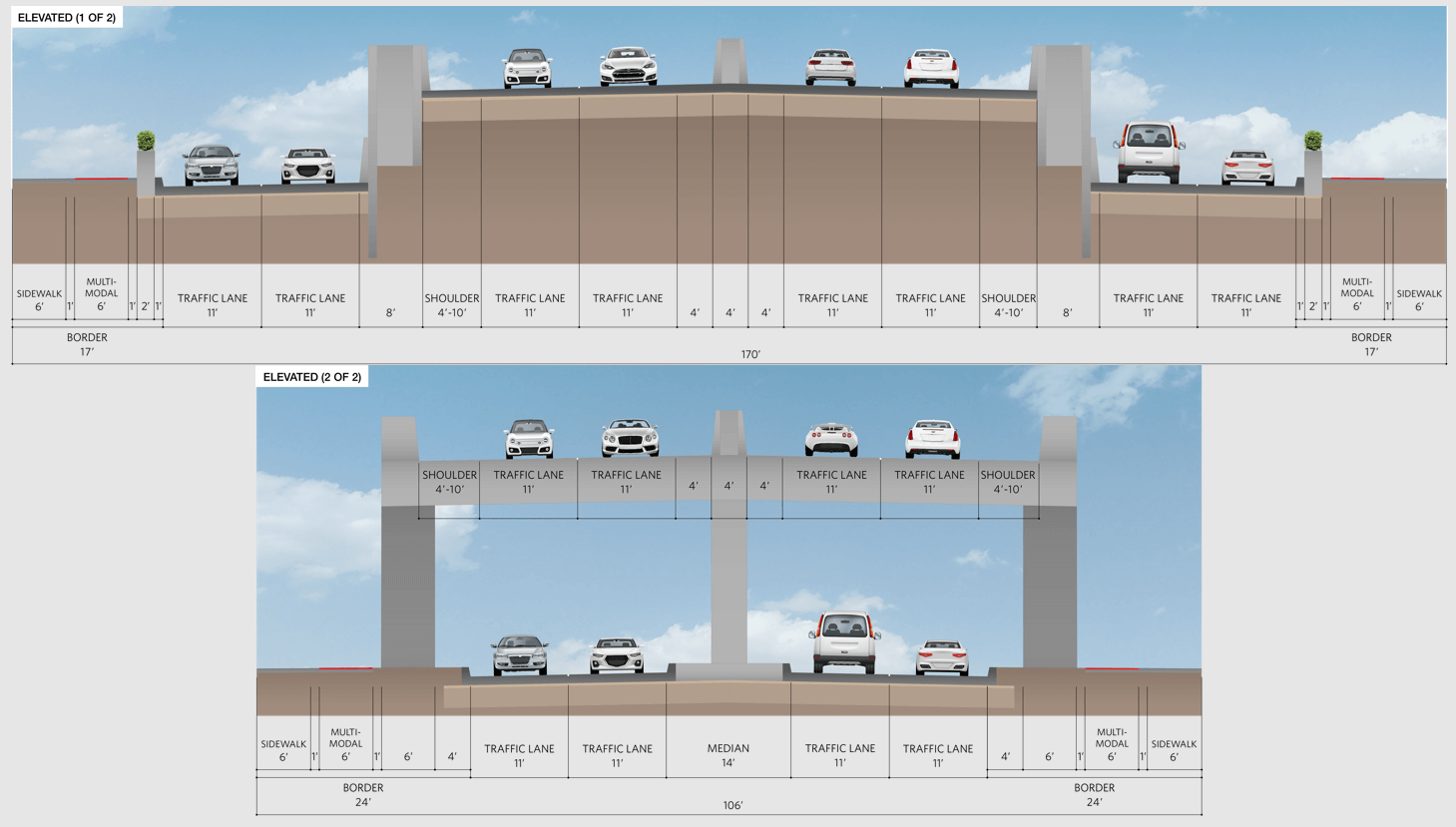 A tunnel concept would take travel lanes below the existing roadway and travelers would pass directly from one end of the tunnel to the other without the option of exiting. The surface level roadway above the tunnel lanes would allow for access along the Northwest Highway corridor. The beginning and end of the tunnel section would be wider where the surface lanes and tunnel lanes separate. The tunnel concept would require additional right-of-way in the portal areas. 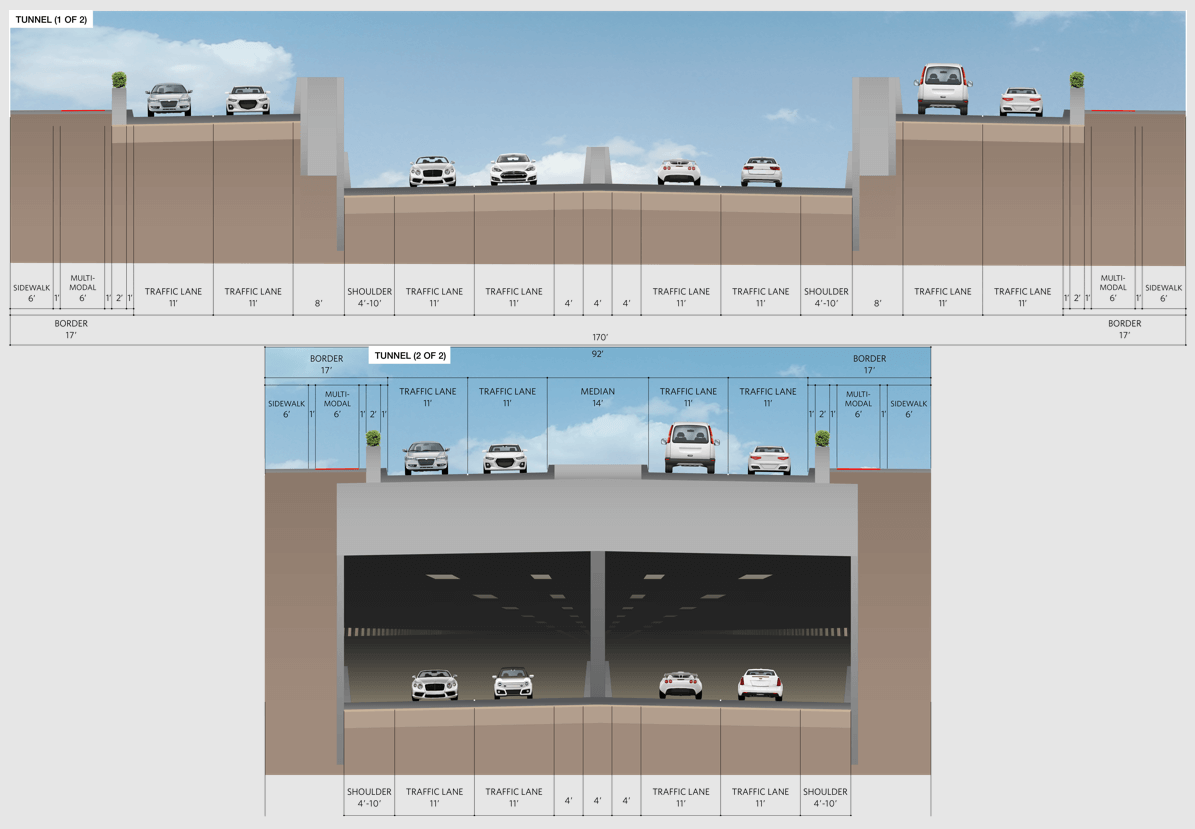 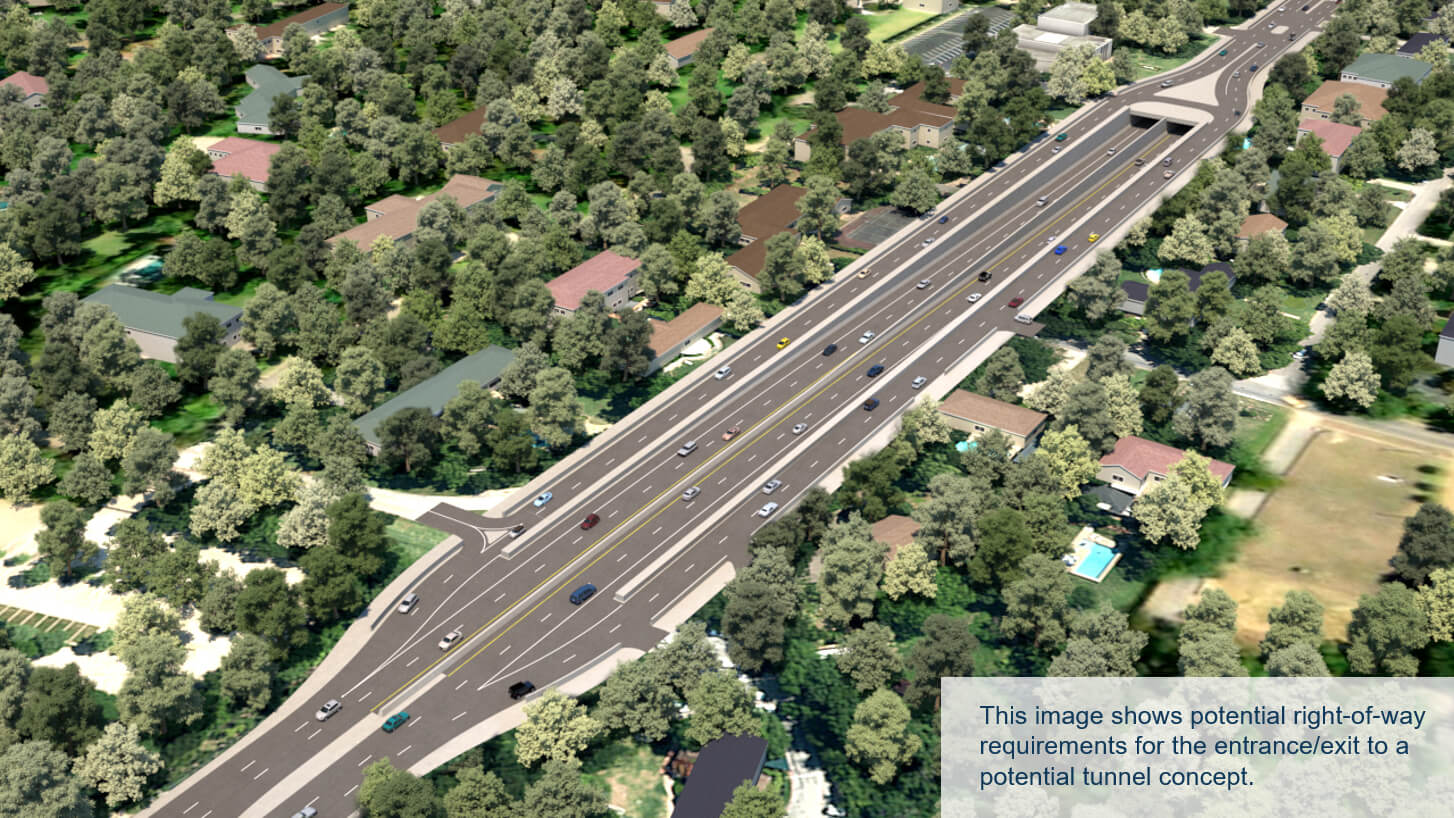 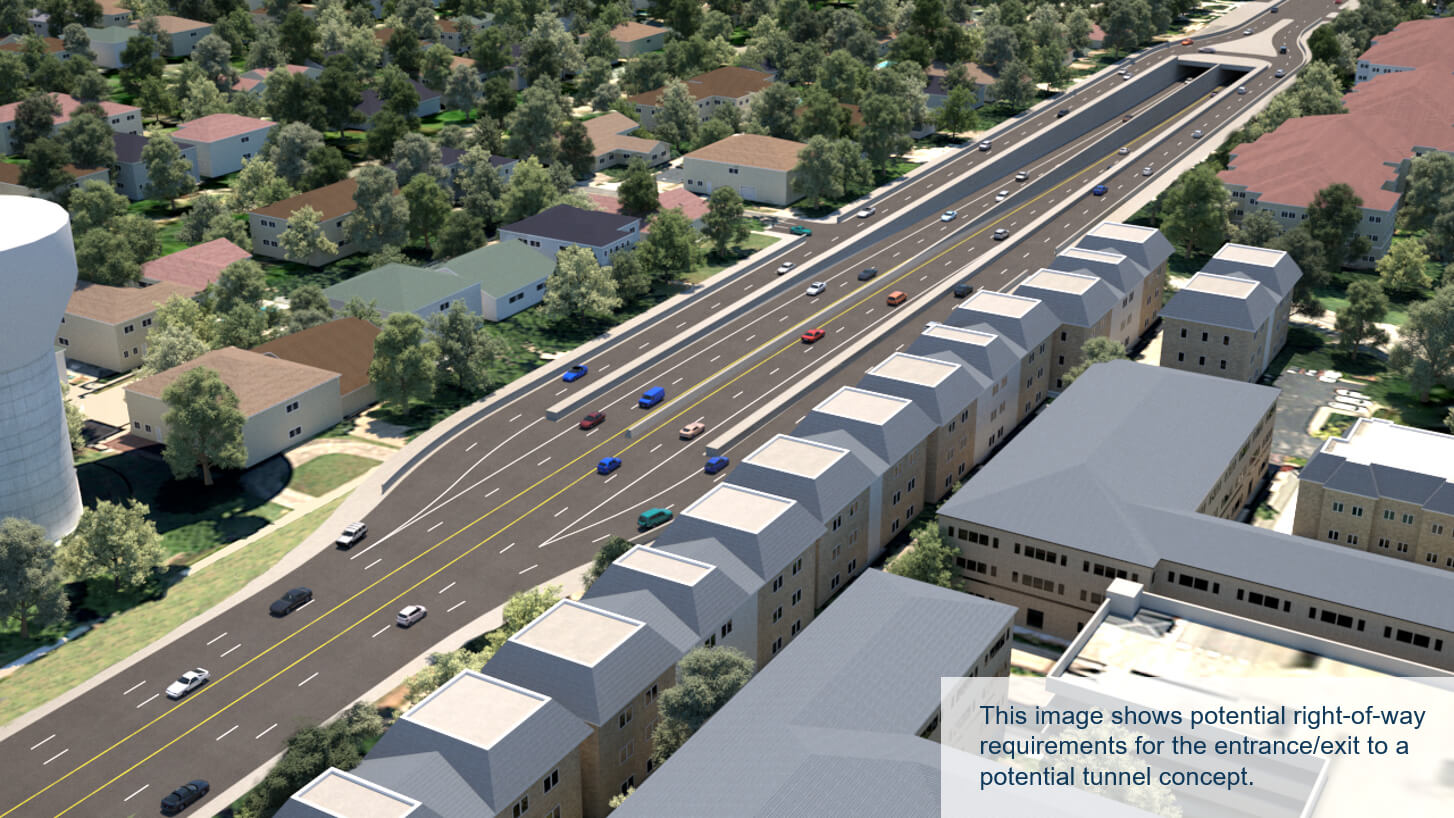 Tell Us What You Think

Improvements for non-car users such as pedestrians, cyclists, and transit may require additional right-of-way where space along the corridor is limited. Changes to the existing roadway configuration may be needed to provide multimodal facilities such as sidewalks and bike accommodations that are comfortable to use and operate effectively. 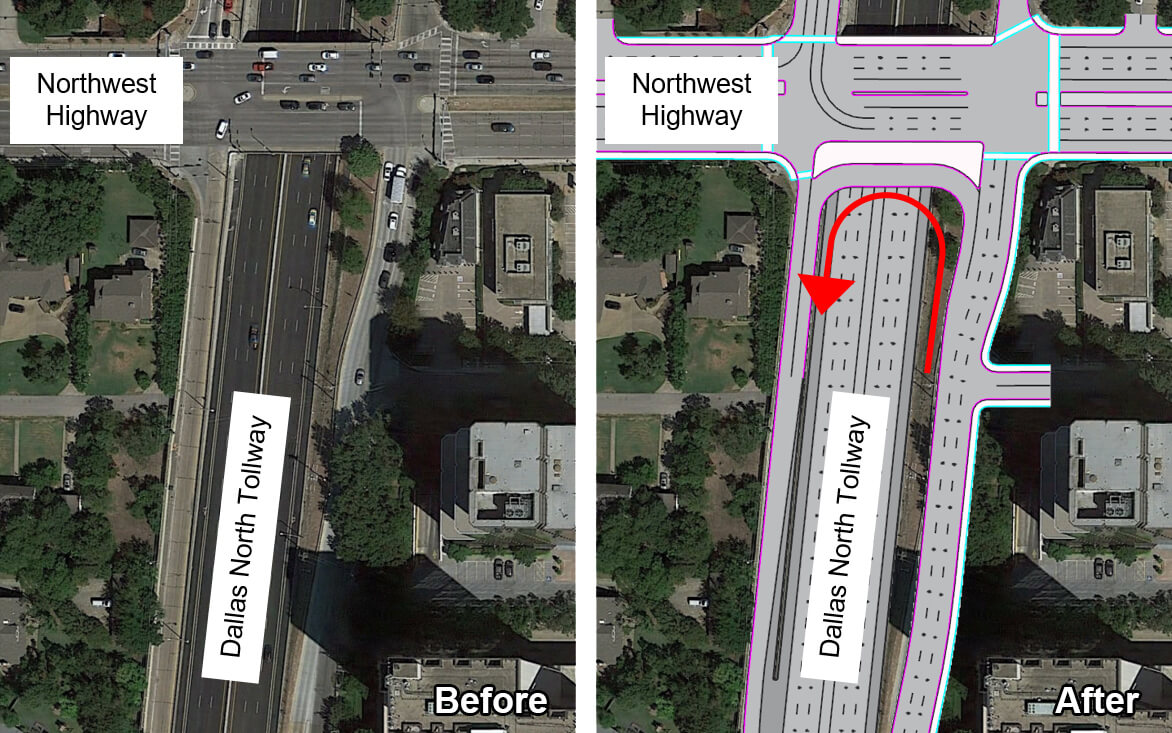 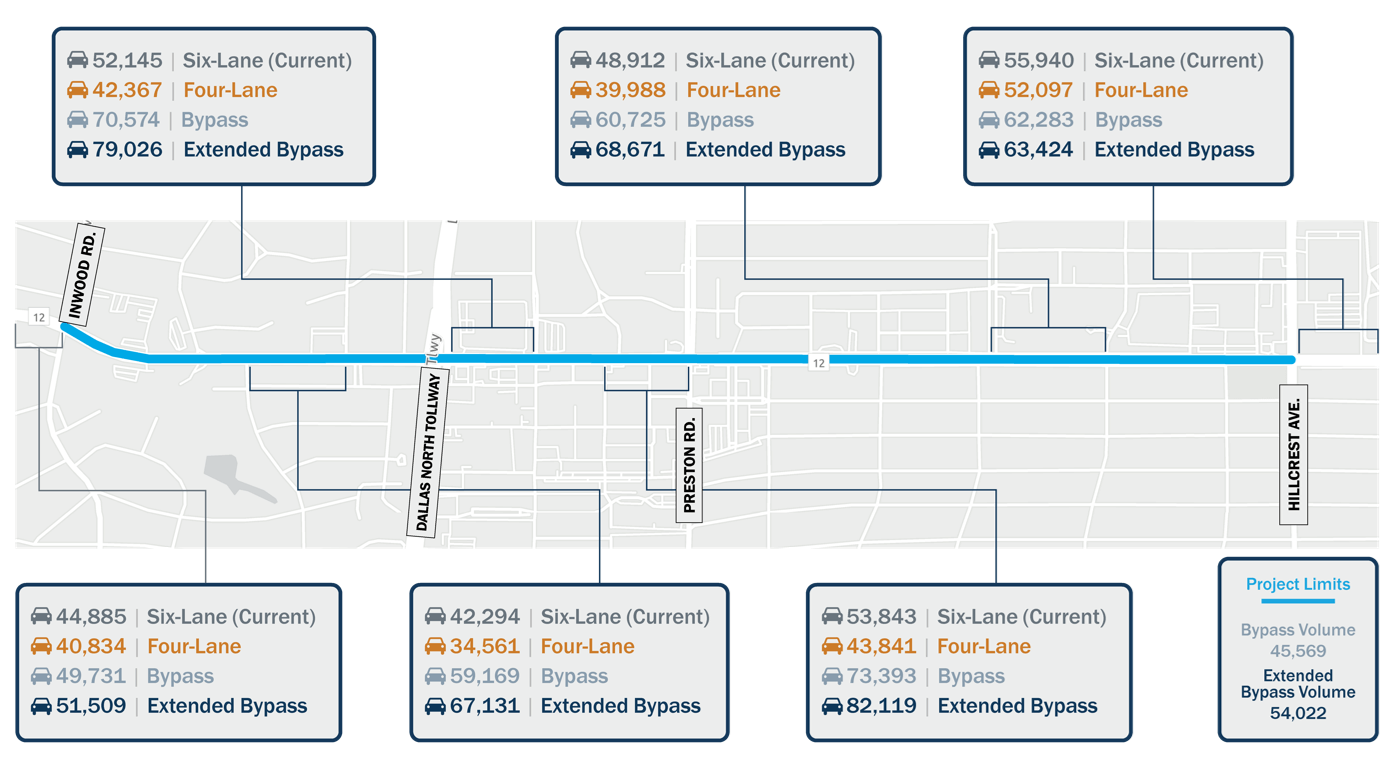 The image below shows the expected level of service (LOS) for each of the four scenarios analyzed based on anticipated traffic in 2045. Level of service is designated by A (best) to F (worst) ratings. 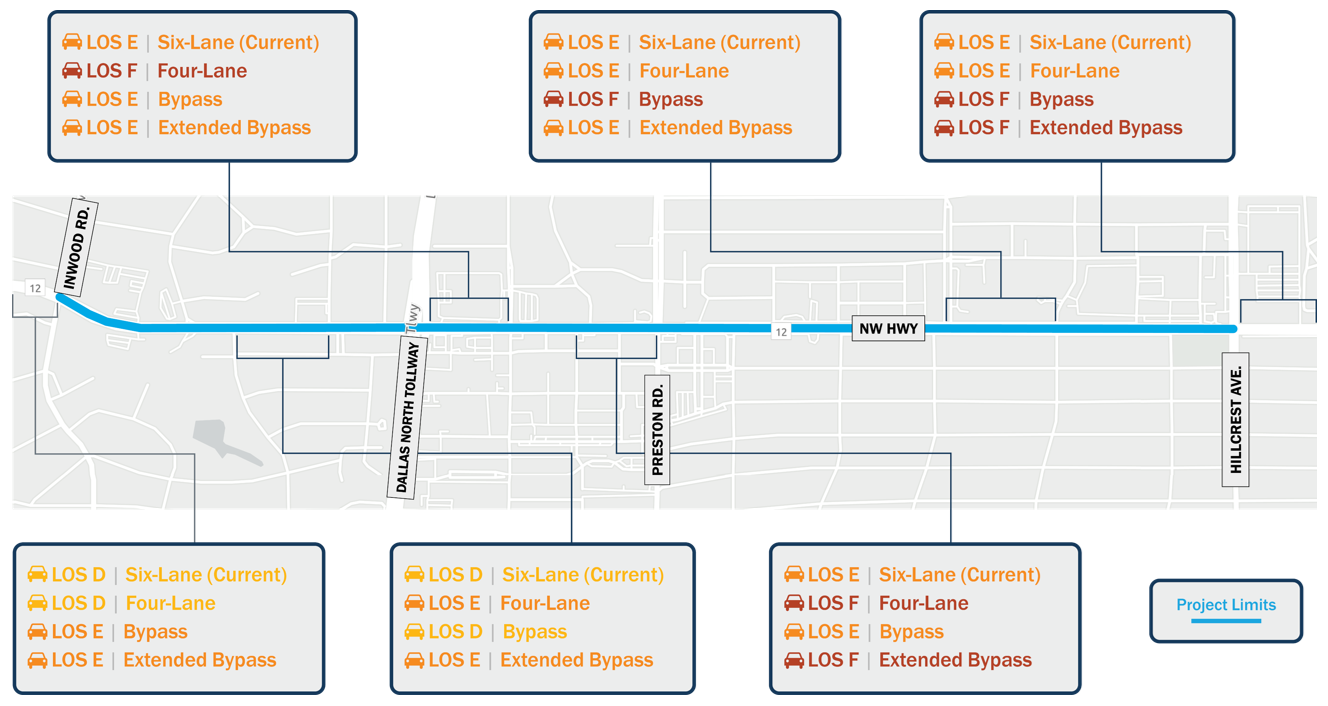 The image shown here is the amount of traffic that would shift from Northwest Highway to adjacent parallel roadways based on each concept analyzed. 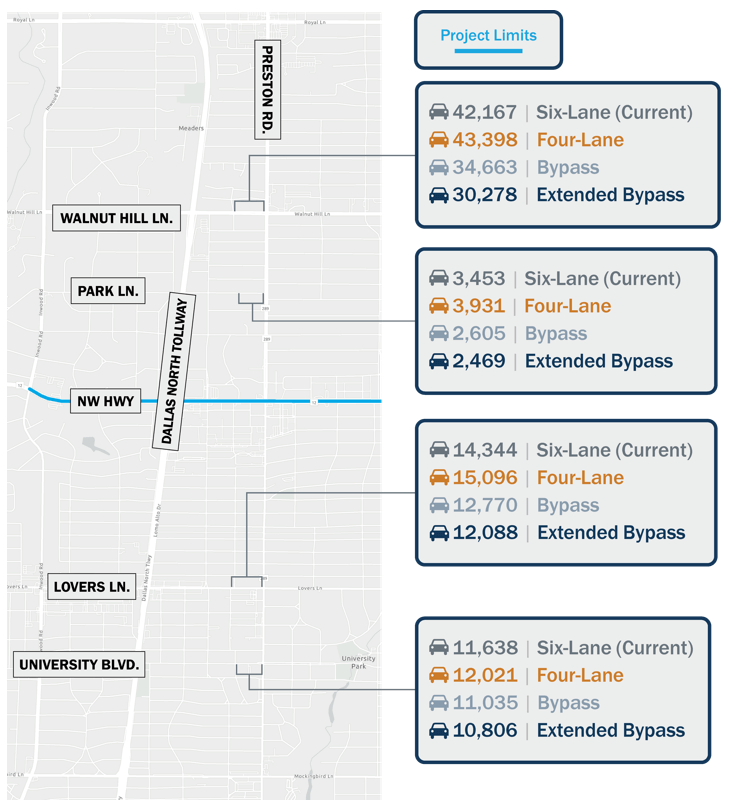 The image below shows the amount of traffic anticipated on cross streets for each of the four scenarios analyzed. Traffic volumes on cross streets is expected to increase or decrease depending on the number of lanes provided on Northwest Highway.

Study Timeline and Next Steps

How you can provide comments and obtain additional information.

We Want to Hear From You!

Thank you for participating in the Northwest Highway (Loop 12) Feasibility Study virtual public meeting. We look forward to hearing from you. Please submit written or verbal comments by our deadline of December 22, 2020 using any of the methods outlined on this page.

Access the online interactive map here to explore the study area and provide input on issues and ideas you have for the corridor. Click here to launch the comment map.

A phone number has been established to receive your comments via voicemail. Please call (833) 933-0437 to record your message.

Property owners have a legal right (Uniform Act) to fair compensation for their property. Several publications are available to help landowners understand the ROW acquisition process and are available through this Virtual Public Meeting. They include the State Purchase of Right of Way from TxDOT, and Relocation Assistance. The booklets are in PDF form and can be downloaded.

Visit the project website at www.keepitmovingdallas.com/northwesthighway/publicmeeting for additional project updates and materials.